My sister and her friend snapped those pictures while there

Something must be done to avoid such incidents 😦

Soho Salon is having a charity event at their salon on Friday in support of animal friends. They are donating proceeds to the charity. How wonderful is that? Getting pampered and for a good cause too!!! Do not miss it 😉

For more on Soho Salon, check out their Facebook Page (link) or drop them a visit on their blog (link)

“How many hundreds and thousands of people did that “Atlantis” Dolphin kiss by now??! Did he even want to kiss all those people?! Does anyone care about how he feel towards all this !! Talk about animal rights :p”

O Cockatoo, Where Art Thou?

A bird went missing in Daiya and the owners are super worried! Its a rose breasted cockatoo, if found… please contact Abdullah 6693-3377 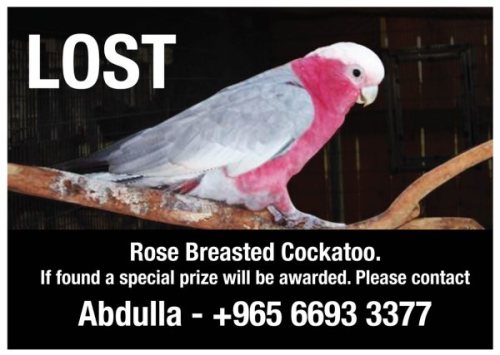 Buzberry and Danderma posted about the noticeable increased numbers of butterflies… I have noticed that too, but check this picture out 😉

This butterfly paid a special visit to my friend at work 😉 Cute!!

While browsing the net, I saw a banner ad to vote for “Bu Tina“… I did not get it so I clicked!

Turn out that this site is about a project for an island in Abu Dhabi (read more about it here).

Ad – Inside A Bird’s House

Cat Thinks its a Chook

Four legs, two pointy ears, whiskers on his face – Bustopher might look like one, but he is far from being an ordinary cat!

The four-year-old feline thinks he’s a chook (Australian for hen).

When Naomi Oliver’s chickens laid their eggs and didn’t show much interest in the incubation and the upbringing of their offspring, the animal-lover’s feline took over the command in the chook shed – and started incubating the eggs.

“I am not sure if he knows that he is a cat, he doesn’t really behave like one,” Mrs Oliver told the Northern Territory News.

“Bustopher often wanders around in the chook pen, playing with the chooks as if he was one of them, not a predator.”

But it wasn’t until her chooks laid a few eggs in a nest outside their shed that Mrs Oliver discovered her cat’s quirky affection for her poultry.

“I was looking for Bustopher and found him sitting on the eggs, obviously trying to incubate them,” Mrs Oliver said.

“When he was still there after three days I started wondering what was going through his head – but I am sure he thought he was doing a great job.”

Mrs Oliver said her cat only left his nest once or twice a day to grab a feed and have a nap on her bed, before heading back to his hatchlings-to-be.

“He’s a real character, and obviously friends with my hens but when nothing hatched after three days he gave up on sitting on the eggs.”