So okay, let me list some of the things I have tried throughout the years…

Bone marrow (I ate bone marrow as a child A LOT! I dont know if I will do it again!)

Escargot (In Europe! Not bad actually)

Frog legs (I tried it from a friend who was having it for dinner… tasted somehow like chicken :-P)

Venison (While visiting Alaska! I was told its a MUST have)

Some sort of river fish when I visited Taiwan! (I have strange feelings towards river fishies)

So now… moving on to less “strange” food I ate and tried!

And same goes for potato chips… In lime (click here)! And I got to try wasabi flavored chips brought to me all the way from Thailan by my very good frienemy N-Logic!

He warned me not to take BIG bites.. and since I am not so much into spicy food, but into trying out different things I took the challenge! 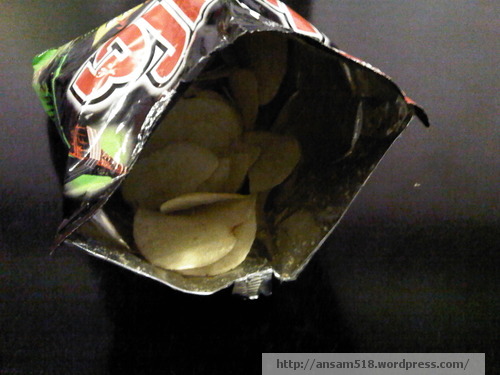 The moment that potato chips bag was open, the smell of wasabi tickled my nose I almost sneezed! I took a medium sized chip and ate it… that gave me a quick rush to my head and a strong hit in my throat…. and cleared my sinuses! My eyes became watery too!! I must admit that I got a “hmmmm yummm” feeling afterwards and had few more chips! It never gets easier because you get to go through all that over and over… but the after taste is amazing! I had to stop though cuz it was burning somehow!

What is the strangest food you’ve ever tried/ate? Come on… Do share 😉

This entry was posted in Culture, Food, Question. Bookmark the permalink.